March with the poor in the March for Our Lives June 2nd from Philadelphia threw June 12th to Washington D.C for the 50th anniversary of the Kings Poor Peoples March and Resurrection city. Together we will rise .

As we celebrate the 27th Anniversary of the ADA, we fight alongside our many ADAPT & NCIL friends to preserve our healthcare and Medicaid services and supports.  Today, many of our friends continue the fight in DC where they have protested through the heat and rain since Sunday evening.  Please read the statement below by the National Council of Independent Living and National ADPT on the Senate’s Motion to Proceed Vote. PPEHRC sends power, prayers and support as we stand solidarity with our friends in Washington, D.C. and across the nation.

Yesterday, at the exact same time that the Senate voted to proceed on a bill that will strip disabled people of lives and liberty, approximately 250 advocates from ADAPT and the National Council on Independent Living were protesting the vote in the atrium of the Hart Senate office building. Capitol Police arrested 64 of our people.

We are disgusted that this bill has not yet died. Despite massive outpourings of opposition from the disability community and from the American people, Senate Republicans continue to want to debate a settled question: that the lives, liberty, and equality of disabled Americans are promised in the Constitution and secured in law.

END_OF_DOCUMENT_TOKEN_TO_BE_REPLACED

Calling artists of all talents in North Philadelphia: PPEHRC needs your help! Instead of playing music only to line your pockets, we believe can you utilize your skills to transform society while still making a living. In preparation for the district to take on the capital, we are organizing a series of block parties. We need musicians, spoken word poets, and other artists to perform at each party. Please fill out the form linked below if you are interested: 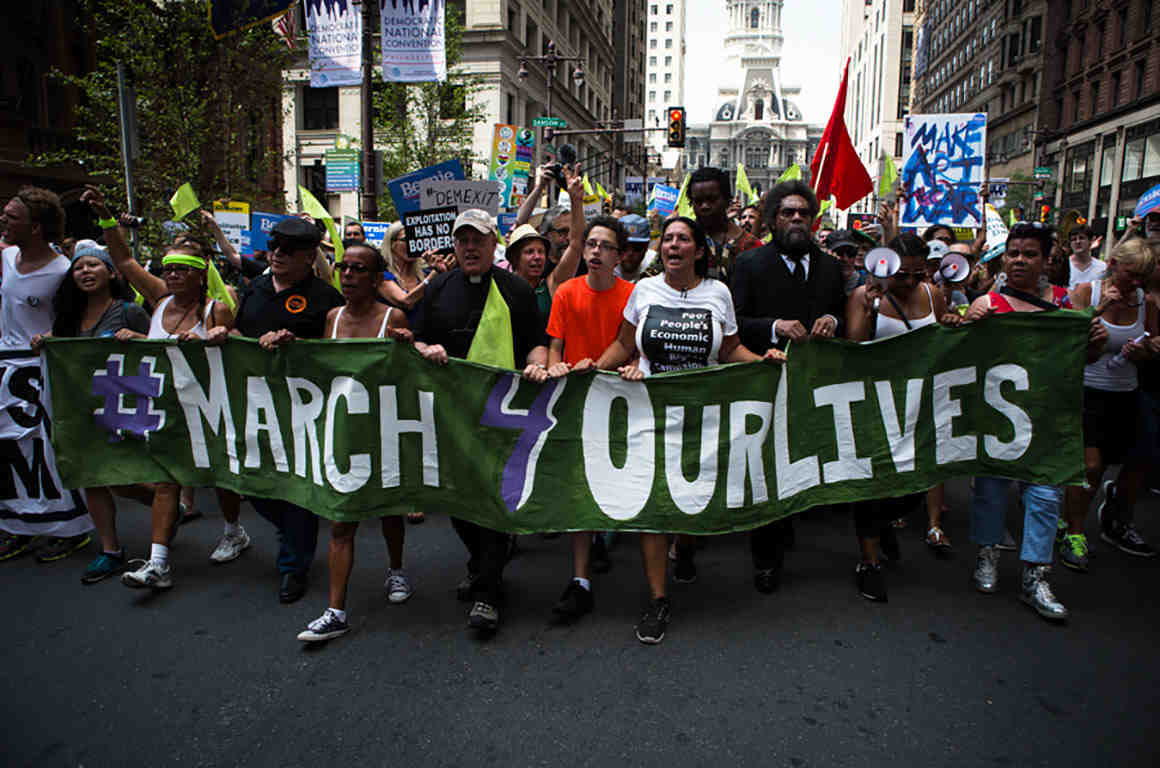 The past week has been a huge success for PPEHRC. We started the week strong with March 4 Our Lives , the march along broad street to help end poverty and homelessness. Thousands of people joined us at 3pm on the south side of city hall , some even speaking to the crowd. On Wednesday we had a ‘fart in’ serving beans in South Philly in front of the AT&T station to the delegates who walked out of the Democratic National Convention, the beans symbolizing our belief that the two party system in America stinks!! Bloggers and reporters alike joined us as we shined light on the unfairness of the two party system in a humorous yet stimulating way. While these events took place we managed to have a somewhat successful Clintonville, even though two huge thunderstorms happened to destroy the area, forcing us to rebuild twice, we still did our best to accommodate homeless people around the Philadelphia area with makeshift homes in a field down American and Lehigh.

Overall its been an incredibly great week for PPEHRC and we feel as though we can create more success in cities around the US. PPEHRC works hard by making efforts to help homeless people, poverty is a huge issue in America and we put forth a lot of effort to lower these incredibly high statistics. Everything from protest to discussions with government officials, we make it our duty to help those who suffer through poverty and homelessness. If you would like to start a PPEHRC chapter in your very own city and can manage to gather at least 5 people who would like to participate in PPEHRC, and then contact the organization we are willing to help contribute to making the organization grow. This is a huge step towards creating more rights for people and together we can all help this organization expand!!

The press conference will be held at 10 AM on Thursday July 7 in front of the Cuyahoga Job and Family Service Building at 1641 Payne Ave, Cleveland. Please join in Cleveland for the fight against poverty.

END_OF_DOCUMENT_TOKEN_TO_BE_REPLACED

PPEHRC are having a sale on Tyler Perry play  “Medea On The Run” tickets. Sold out show for tonight at 7:30 pm, we have six tickets available for sixty dollars. The original price or hundred fifty dollars has been cut, balcony seating, South Broad Merria Theatre. You can contact as on are facebook or twitter account. Half the income goes to the PPEHRC organization.

On May 28, 2015, Cheri Honkala of the Poor People’s Economic Human Rights Campaign (PPEHRC) and German Parodi of Disabled in Action of Pennsylvania, Inc. (DIA) announced a new “March for Our Lives” to take place at the 2016 Democratic National Nominating Convention in Philadelphia.